Favourite Songs – Bat Out of Hell 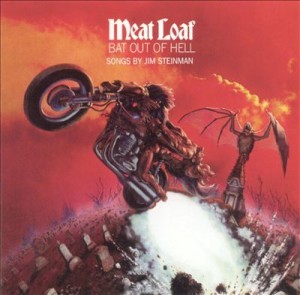 I’ve been meaning to do this for ages but I thought it would be interesting to look at the favourite songs that people play at Moselele and why they like them. To start off, my guilty pleasure is Bat Out of Hell by Meatloaf. Not because it’s a great song (epic might be more appropriate than great) but because it is a song that we worked really hard to get it to work. Before we were putting together Songbook 3 I spent a lot of time thinking about what would be the most ridiculous songs that we could try out on a ukulele.

I had a long list of rock ballads but in the back of my mind there was always Bat Out of Hell. It’s the epitome of pompous rock and at nearly ten minutes long is just an unreasonable ask for a group of people on tiny guitars. I mentioned this to one of the people at Moselele and he just went away and worked it out, we then never saw him again. Thanks Paul, wherever you may be these days.

When we first sat down and had a go at it we just couldn’t make it work. It was too close to the original and I think it’s fair to say that everyone had a very different recollection of how it went. It actually ended up sitting in Songbook 3 for nearly a year largely ignored. That always bothered me and I knew that if we could ever sort it out so we could play it at a gig then it would be one of the greatest moments of my life.

We ended up getting a small group of people together and simplifying it a bit, but also properly practising outside of our Prince of Wales sessions. Eventually we got it to work, it was one of the greatest moments of my life.

You can listen to us having a go at it here. It’s shambolic but it’s fun. You can also download the chords and have a go yourself.

Have you got a favourite song that you love playing and want to tell people why?