Our second interviewee is Ian, one of the founder members of Moselele. Everybody knows Ian. He’s the one in the orange trousers. 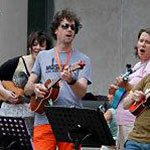 I was in Hobgoblin for a mandolin lesson about five years ago and bought a £20 piece-of-crap uke out of curiosity. It was kinda fun and had some potential. I worked out a Flaming Lips song and London Calling but that was about it. I’ve played guitar badly for years but at the time, through the lessons, I was really focused on the mandolin. I found that a bit of formal training was paying off on other instruments too.

And then we started doing Moselele and the uke took over. What it has done, though, is reawaken a love for playing music and especially for playing with other people. Since then I’ve also started trying to play the five string banjo, cigar box guitar and the Brazilian cavaquinho, a relation of the uke.

Odd thing is, after attending the Ukulele Festival of Great Britain, despite the great playing we saw there, I didn’t find myself inspired to really knuckle down and get good on the uke – but rather to try harder on other instruments. I think this might be part of the power of the uke – it’s a gateway instrument. You could become virtuoso if you wanted, but it gives you the skills to try proper grownup instruments too, not just in the mechanics of playing, but in musicality and learning to play with others.

As with most uke players, I have a few.

That initial £20 cheapie got butchered one afternoon and I attached the neck to a cigar box to make a cigar box uke.

My main uke is a Lanikai Tenor (LU-21T). It’s not an expensive one but it has a great tone. I did a bit of research before buying it and there seemed to be a few people in proper bands like Zach Condon of Beirut playing the same model, which is some sort of testimony. I string it with a low G to give it a bit more oomph. This is where I could be boring about strings but there’s probably a whole blog post for another time in that.

Other ukes include a Flying V (looks great, sounds awful; don’t buy one) and the bath uke (what? Don’t look at me like that – you don’t have a bath uke?).

My latest acquisition is a soprano Moselele Bambookulele because I didn’t have a decent sop. Now I’m not just saying it because it’s our brand, but it is really good; well specced and nicely made for the money.

I don’t use a plectrum (I’ll give you points for calling it a plectrum there, rather than a pick). I kinda think that’s a bit wrong. It can sound a bit flappy on the strings. I use my fingers. Took a bit of getting used to, to not dig in too much, but I prefer the sound. Some songs I have little fingerpicky bits I’ve worked out to give it a bit of variation and hopefully add texture to the group sound. I keep the nails on my right hand a bit longer. In the summer when we were rehearsing and gigging all the time I developed quite a callus on the side of my thumb and my nails were all totally worn down on one side from all the playing.

It was the first one. In the Moseley CDT. There were biscuits and it was rubbish and we didn’t know what we were doing, but some of us came back again and again until we got better at it. I don’t think we were very organised and that’s perhaps why it’s been such a success. I like to think there’s a loose feel to the running of the group. Obviously you have to have some rules otherwise we’d be playing Coldplay songs in Hawaiian shirts, but on the whole people can get involved to whatever extent they want.

The people who were there for the first one were mainly people who knew each other from Twitter, which is where discussions took place about what to do with these ukes people had knocking about until Daz booked a room and made it happen. Some of us went to the pub afterwards and started using each other’s real names rather than our Twitter names which was friendlier.

I look around when we’re playing. I’m looking for those magic moments where it all comes together, where I catch somebody’s eye and there’s that shared moment when you know we have it in the pocket (as the jazzers put it).

I’ve made some great friends through Moselele, and had a lot of fun. It’s not just about the jams on alternate Thursdays but also, between times, the interactions in the Facebook group, not all of it uke related.

Ridiculous as it sounds this daft little ukulele group is one of the most important things in my life. I probably need to look at my priorities, don’t I?

Don’t ask me that. It changes all the time. Sometimes it can be one where I don’t really like the original but there was something special about the way we played it last time. Sometimes it’s a song that I got away with getting into the songbook, that takes on a life and new identify of its own and I feel a little proud for sharing it with people. Today I think it’s probably Make Me Smile (Come Up And See Me) because it has brackets, because it was the best song last Thursday, and because I remember the time we did it live at the Sun at the Station and we were so tight with the bits where it stops, that it sort of hung in the air. I like a song with dynamics, parts where we can split the singing up, and some harmonies. It feels like we’re proper musicians when we do songs like that, rather than 25 people banging away in 4/4 and shouting at people.

Pint of Purity Saddle Black IPA if they’ve got it, else a Timmy Taylor. Oh, and a bag of scratching, please.

I wouldn’t say I practise the uke at home that much. I might if we’ve got a gig with new songs coming up but then that’s often with the rest of the group anyway.

Does my wife or the cat mind? My wife’s got used to it, ever since she came home one evening to unexpectedly find a houseful of people playing I Will Survive. And the cat will wander in at some point, take a look at us, despair and go out to kill some of the local wildlife.

Other than that l’ll work out new songs whether it’s for an upcoming songbook or for one of the side projects. I have an as yet unrealised dream of us doing classic albums in their entirety so I keep working them out.

A really difficult question, and one I could answer by reeling off a list of some of the amazing things we’ve done but then I’m potentially robbing other questionees of their opportunity to recount some of them.

Personally, the recording of our version of Do They Know it’s Christmas was a major highlight. What started out as a joke with Emma messing about with her earmuffs one Thursday evening, like on the video, turned into an epic Facebook thread about actually recreating the song and the video. This went from a joke to actually doing it in less than a week, because with Christmas looming we really didn’t have much time.

We recorded the whole thing in a little over three hours, recording everybody playing the backing track on uke only first; and then building it up with everybody taking turns for their line, adding combinations of people for harmonies and finally getting the clanging chimes of doom recorded. It was the first time most people had had any experience of multitrack recording and I think they enjoyed themselves being pop stars for the evening. We had cameras running throughout the session to make the video from. In the end I had over 40 tracks on Cubase on my iPad. I made sure I backed up frequently throughout the session and when mixing the next night. I didn’t want to be in a situation where I had to apologise to everybody for not having a finished song and for wasting their evening.

I’d done some recording myself at home before and spent a bit of time in studios with various bands I’ve been involved with, but this was the first time I was actually doing the recording, engineering and production for something to this extent, and with anything like this number of people. It was probably a bit stressful but I was off my face on Benylin because I’d got a cold.

Buy or borrow a uke and come along. We do suggest you print off the songbooks but if it’s your first time somebody will share with you, which actually helps with making friends. There’s no pressure to be brilliant or perform so it’s quite safe. We’ve had people who don’t even know which end you’re supposed to blow into turn up and get involved. It’s better than going for lessons or sitting in your room on your own. You’ll progress much quicker. And sorry to undermine any of those tutors out there charging people for group lessons but we’re free, and there’s good beer on.

Or go join another group. I’ve visited a few others. I can recommend a really good one in Toronto. I was only there for a night and made some great friends there too.

The point is, playing music is a great thing to do, playing with others is even better. The uke is such an easy instrument that it gets anybody into music quickly. There’s a part of me that want to start a uke group at my workplace at lunchtimes. It would be a good way to relieve some stress during the day and to get people working together. It’s only the thought of turning it into some sort of team-building exercise that stops me.

You know about the secret tunnel that runs from the Prince to <redacted> don’t you?