If you watched Moselele play any gigs last year, then you’ll have seen John – he’s the only person who managed to make every single one. That’s what we call dedication. 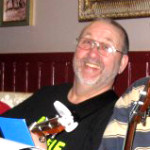 I saw some YouTube videos of the Ukulele Orchestra of Great Britain, and was motivated enough to buy a ukulele. I bought a cheap one of course, £15 or thereabouts, and bashed out some chords – but never really applied myself to the thing (much like I have(n’t) with guitars, which I have owned since I was 16 or so; I knew a few chords but never really worked at it, if I’m truthful).

The trigger for more application was a chance meeting with a retired work colleague in March 2012. He said that although he’d never played an instrument in his life, he’d taken up the ukulele, and he went weekly to the local church community centre; “it’s only a pound”. I started there the week after and I fell in love with the four string world.

After I got to grips with my cheap soprano I wanted more, so I mistakenly bought a ‘telecaster’ lookalike for around £40. It buzzed like a bee. I didn’t fall in love with it; I couldn’t cure the buzz on the third string. I ‘imported’ (eBay) a wide neck Oscar Schmidt tenor ukulele from Alabama, USA – as I wanted to play a D major ‘properly’ – which I love. It’s loud and encourages finger picking (another future aim). Last month I gave myself a Christmas present of a Mainland Tenor. It’s bloody gorgeous!!

I like to use a plectrum. I used to use the felt ones but now prefer the Jumping Cow leather ones; these I find just the job when they are broken in (slightly worn). I still like the felt ones; I use old felt ones when I am practising as they are much quieter and ‘family friendly’.

As the year went on and I looked around the internet at things ‘ukulele’ I was intrigued by Moselele. I saw them on BBC Children In Need and was impressed, so I brought Moselele up in a conversation with Bob J at one of the Tuesday (church) nights and said I fancied going along. He said he’d seen the website and thought about it too, so we went along to the first Thursday in December 2012. What a night! Three hours of playing (or attempting) pop music, some of which by artists I had never heard of. My fingers were killing me but I was so knocked out by the experience, I was motivated to get as up-to-speed as I could. One nice touch for our first Moselele was that, as it was Snowselele build up, Daz handed a Santa hat to everybody turning up. We’d never been there before and we had an early Christmas present!!

Probably would have to go with ‘Make Me Smile (Come Up And See Me)’. It’s such a great feeling song. It’s never long enough. You can tell the sheer enjoyment of the company as we play it.

I look forward to my pint of ‘Sad Bastard’. It’s a lovely drink. I have found as I get older I enjoy the darker beers – probably similar to wine drinkers who gravitate towards reds with age!

Yes, not as much as I should. I find it’s a great ‘unwinder’. I do like to have a go at the more tricky bits of songs when I can, as well as doing some songs I have embraced over the years, which are probably not ‘Moselele’ songs (too folky and too old, perhaps). I do want to record myself doing some of these songs. The recent Band Aid project was a lesson for me in recording, great fun!

Probably has to be the recording of Gurdan Thomas’s ‘Massive Head’ song. The project was to be a world record attempt at performing a song; we couldn’t get to Germany so we sent a video. Great fun on a Saturday afternoon. Nice little project and a lovely (funny at times, thanks Bashti) video.

[Editor’s note: Gurdan made a video of his band playing along to our video in a bar in Germany, and thus breaking the world record as previously set by Moselele… but I think he’s accidentally wiped it because I can’t find it anywhere.]

Totally enjoyed the putting together and performing of the ‘Rude Food Fiesta’ great project. Some good songs, of which hopefully some will appear in book 5.

Daz’s determination to make ‘Bat Out Of Hell’ work. It turned from a real mess into something quite polished, which I really enjoyed doing. It was interesting to see the transformation, working on different bits then joining them up.

Do it!! you will struggle to find a nicer bunch of people, and a better collection of music to play (unless you’re a George Formby fan, of course). I have been inspired by these people; the individual talents of these guys and girls is awesome, and they are only to happy to include you in their world of music. You will improve as a player and singer without feeling you are ‘working’ at it. See you there!

A secret? It wouldn’t be a secret then, would it?

I admit to having a banjo ukulele. I bought a new old fashioned type Gretsch, which is nice, and I will use it when I do some recording as a complementary instrument.