If you’ve been following the Meet Moselele blog posts so far, you might be wondering where all the girls are. Well, here’s one. It’s Rhiannon. Hooray!

No stranger to the stage, Rhiannon’s also in some proper bands – the CBSO Chorus and folky alt outfit JennyWentAway. We’re sure we’re her favourite, though. Pretty sure. 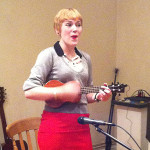 I started playing uke twice; when I was 18 I bought a bright green ukulele that I named Bob for £15 from Hobgoblin in Bristol. It was a bit of a half hearted affair and ended up with Bob being left to gather dust. Fast forward to two and a half years ago and I rediscovered Bob, blew the cobwebs off and thought “this can’t be too hard”. I quickly realised that if you spend £15 on an instrument you get something that makes a pretty rough noise, so Christmas 2011 I bought the uke I currently use and the rest is history.

I play an Ashbury soprano uke that I named Matilda and other than that the only changes I made have been two new sets of strings. I use a plectrum when I play as I find it makes the sound a bit louder for such a small instrument (well that, and it saves my fingernails from being shredded)

My first Moselele was February 2012. I’d walked past a rehearsal in August the previous year, but it took me that long to build up the courage to attend, not least because I had no idea what to expect and was a bit scared it’d be a bit intimidating. When I first walked in the room I thought my assumption had been right as I felt a bit exposed being both a new person and someone who has a loud(ish) high voice that at times felt like it stuck out like a sore thumb. It turned out that I couldn’t have walked into a friendlier room and everyone was very welcoming, even when I managed to knock over a pint of beer over someone’s songbook…

There are a couple of things. I love having the opportunity to do something musical that’s a bit more relaxed than my other regular music group (I sing in the CBSO chorus which is almost the polar opposite); I’m a big fan of so-bad -its-good 80s pop which features quite regularly in the songbooks; but, without meaning to be horribly sentimental, the people are probably the biggest factor; without the people it just wouldn’t be as much fun.

That’s difficult. Can I pick several? Echo beach, New England, Hotel Yorba and The Look of Love all make me sing even louder than usual.

It varies; either I head out to the wine shed for red wine or I drink real ale.

Sometimes, especially when there’s a new book out. My boyfriend doesn’t seem to mind, but I think part of that is because I promise to play Total Eclipse of the Heart at least once per practice.

There are lots, like making the Band Aid video and playing on one of the hottest weekends of the year, but it’s probably the time we were playing a song in the last hour (I think it was Stairway to Heaven) and, following Stephen’s lead, everyone ended up standing up to play. We’d assumed he was rocking out so hard he had to stand so we all joined in ending with a rock jump. Then it turned out it was just because he couldn’t see the music.

Do it. Even if it seems like something you’d never normally agree to without having to be bribed. It’s worth it.

When I’m cooking something with tinned tuna in it I eat more tuna straight from the can than goes into the dish.