This week’s interviewee is Mark. What can we tell you about Mark? Well, he insists he didn’t stalk us before he came along to a Moselele night, but the evidence is overwhelming… and his daughter is our biggest fan. Aw, cute. 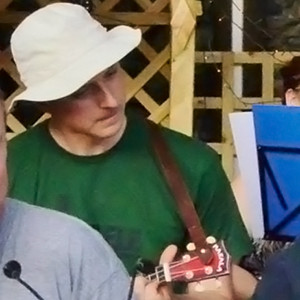 I started almost exactly a year ago, with a very nervous first session where I could only really attempt a C chord on a uke I’d ‘borrowed’ from my four year old son. I still play the piano (badly), but no other instruments.

After a few weeks I decided I needed to restring my four year old’s uke. Reasonably, he refused, so I bought myself a cheap red Makala Dolphin. Now I’ve upgraded to a ‘Moselele’, concert size. I sometimes use a felt plectrum, sometimes not.

I remember being vaguely aware of Moselele (bizarrely I’m in a crowd shot of the first gig three years before I joined!)
[Editor’s note: he’s right. Creepy much?]

I checked the website and then just turned up. I wasn’t sure what to expect to be honest. I was a bit concerned about knowing nothing, but I soon learnt that no-one else knew anything either.

Playing music in a group has been a total revelation to me. It sounds weird and I’m not sure how I’d got this far through my life without trying it before. Perhaps because the piano is a solitary instrument and you rarely get to play it in a group? It’s great when we are playing well; it’s sometimes hilarious when it falls apart. Moselele at the Prince of Wales feels a bit like a continuation of the ancient tradition of meeting together in a pub to sing traditional folk songs, but in our case we are singing dubious 80s power ballads. It’s also about a shared musical heritage and anyone – anyone – can contribute to that.

Timothy Taylor’s Landlord. And one of Ian’s pork scratchings on the way past.

I practise songs for gigs, including listening to them on loop, sometimes try playing them with the kids, managed a couple of Xmas singalongs. Come to think of it the neighbours are moving house.

Rude Food Fiesta was an extremely strange experience: singing ‘sink you with my pink torpedo’ to a crowd in an allotment in Digbeth? I never thought I’d do that.

It has been quite a year – try it.

This is a confidential website, right? I’m a sleeper agent for North Korea.