Moselele wouldn’t exist without Daz. It was his idea and it’s his unique leadership that makes Moselele the way it is (we don’t call it a Dazocracy for nothing). So it feels a bit silly asking him the same questions as everyone else. But we did it anyway. 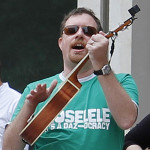 The wife bought me a uke for Christmas about five years ago. We knew someone who started up a ukulele group in Hull and I must have told her I was interested, otherwise it was an entirely random present. I’ve been playing the guitar for about twenty-five years but fell out of playing it regularly and I thought learning the uke wouldn’t be a bad thing to do.

Although a lovely gesture, it turned out the Mahalo uke was a nightmare to play so for a year or so I just didn’t bother and I forgot about it. I really only started to play the thing once I met other people at Moselele. Strumming along on my own to songs I don’t really like that much turned out to be pretty soulless. Strumming along the same songs with other people, on the other hand, is completely different.

Hmm, quite a few really. I think my main one is an Ashbury electro Tenor. I don’t really like it much but it’s easy to play. My favourite is my Fluke M10 Tenor – unfortunately the shape of it means it’s awkward to play either standing up or sitting down, which is a major design flaw.

I also play a Republic Nickel Resonator (concert) because it sounds odd, an aNueNue electro Soprano (with Concert neck) and a Mainland Baritone. I have a Kala UBass but don’t really play it as I had forgotten, when I bought it, that I can’t play bass.

I’ve never altered any of them other than changing strings. And I don’t play with a plectrum. It’s a ukulele, why on earth would you want a plectrum?

I do remember my first Moselele. April 5th 2009. It was raining. It sticks in my mind as I’d arranged it and, for the first one, had stupidly thought it would be a good idea to meet in somewhere that wasn’t a pub. So we ended up meeting in the Moseley co-working space where some other people were trying to hold a meeting.

So I suppose my first impressions were surprise that people actually turned up and an instant recognition that we needed to meet in the pub rather than an office. It might seem obvious now but the lure of free tea seemed compelling at first.

I keep coming back as I didn’t realise I really had a choice. Though, given a choice, I would still be there every first and third Thursday of each month. I like getting to sing songs that you really shouldn’t sing in public and meeting lots and lots of different people.

I have to say that I can’t think of many songs I would ever choose to listen to. I have a very personal loathing for many of the songs that uke groups play, but I don’t really like many of the songs we play either.

I’ve always worked on the principle that if we started including stuff I like in the books then I’d be on my own. Having said that, I’ve got a particular fondness for Africa and Bat Out Of Hell – both are songs that the majority of people really didn’t want to play but, with quite a bit of obstinacy on my part, we’ve managed to make them our own.

No, never. I didn’t get into this game to be practising at home, in fact anyone that does practise at home is taking it entirely too seriously. Unless you want to come and play gigs with us – in that case you better practise. My views on this are far from consistent.

There was so little chance there was going to be only one. Playing at the Bulls Head in 2010 and finding out we could actually entertain a decent size crowd with our ironic take on pop classics. Moving to meet at the Prince of Wales which is the point that Moselele became what I had hoped it would when we started (and also the point I stopped having to buy people presents for turning up). Each of our sing-a-longs, that really shouldn’t work but weirdly do. Getting Book 4 finished (our first decent book) and the first delivery of Moselele Ukuleles. I could probably go on for a bit.

If you’ve never played the uke before then just stick with it. You won’t learn to play straight away but it will come much faster than you think. If you have a basic understanding of a few chords just play them every time they come round and don’t get bogged down in things like strumming patterns. Also come along and sing as loud as you can. We always need new singers; hashing away at the uke is the easy bit.

I’d love to think this is a secret but I have a feeling that it isn’t. Even after nearly five years I have only the vaguest grip on what is going on and can’t think of any songs I can actually play.