Dave T is Moselele’s bass player. He’s got the hip, the hop, the hippy, the hippy to the hip hip hop and he don’t stop the rocking to the bang bang boogie, say up jump the boogie, to the rhythm of the boogie the beat. Say whaaat?* 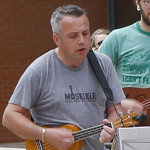 After previously playing bass guitar in Good Question Derek for 10 years, and also with Gerry Colvin in The Atlantics, I all but gave up playing music until my wife bought me a soprano uke as a Christmas present in 2004. I played this on and off for a few years before deciding that I wanted to get better at it and I joined Moselele.

My first uke was a yellow soprano made by Vintage. Despite being a cheap “toy,” once I fitted a decent set of Aquila strings it actually sounded quite nice.

My next uke was a concert sized Ashbury electro-acoustic, which was my main instrument up until I started primarily playing bass again.

My current main instrument is a mahogany Kala U-Bass; it is one of the best instruments I have ever played. Based on a baritone uke body it has the range of (and is strung the same as) a bass guitar, ie EADG, using special strings made out of pasta and blu-tack. I love the fact that it has a tuner built into the body. As Kala’s website points out, the case that it comes in “meets most airline carry-on requirements” which obviously is a very important point of consideration when commuting between Kings Heath and the Prince of Wales.

Due to the low volume of bass frequencies the U-Bass needs to be amplified so I use a Roland 5w Mobile Cube battery amp for sessions at the Prince of Wales and a Roland 100w Bass Cube amp for gigs.

More recently I have acquired an Ashbury open-backed banjo ukulele and I am in the process of teaching myself to play Formby-style!

With regard to plectrums, as Alistair Wood (from Uke Hunt) says in Ukulele for Dummies, “I wish I had the technology to reach out of the book and strangle you until you promise to never use a pick on your ukulele”. In truth, though, I did use a felt pick for a while until I weaned myself off it about a year ago. However, I have never used a plectrum on any bass as I prefer a big fat round sound!

After developing a penchant for playing Coldplay songs whilst wearing Hawaiian shirts my therapist prescribed a course of Moselele.

This came at the same time that an old school friend of mine mentioned that he played with S.O.U.P. North London Ukulele Club, which got me thinking that I’d like to do something similar locally, and a quick Google search turned up the second best ukulele group in the whole of Birmingham. That was some time in 2011 and the rest has been history!

I remembered being surprised that there were so many people interested in playing the ukulele locally. I really enjoyed my first session and now try to come to as many as I can.

I find the sessions an opportunity to switch off from work and do something different for a few hours twice a month. There is a great bunch of people and we always have a good laugh.

To play bass on it’s London Calling by The Clash, to play uke it’s When I’m Cleaning Windows by George Formby (sorry – I love that chord progression!).

A pint of Tribute if I’m cycling or a pint of full fat coke if I’m driving. 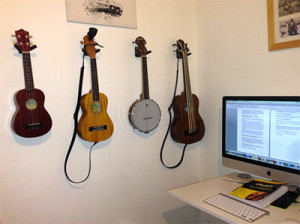 Sometimes I don’t pick up a uke or bass between one Moselele session and the next. Other times I play them for hours every day – especially when trying to learn a new bass part or chord progression. To encourage me to play them more I leave them out of their cases hanging on the wall next to our computer.

I also have playlists of all of the songs on my iPhone, which I regularly listen to whilst cycling to work. (A few years ago I would not have believed that I would be listening to Dolly Parton, Bonnie Tyler or Toto out of choice!)

The summer and Christmas sing-a-longs in the garden of the Prince of Wales. They all merge into one memory but it’s a great one!

It doesn’t matter if you don’t even know which end of a ukulele you blow to make a noise, come along and you will enjoy learning faster than you could at home.

If you are over 40 you have more chance of dying while queuing for a lottery ticket than winning the lottery. They don’t tell you that on the adverts for the Lotto, do they!!

*Here’s Dave funking it right up at last week’s Moselele:

Big thanks to John R who records and uploads all our Prince sessions.