Meet Conor C. By day he’s a mild mannered primary school teacher… but by night he’s King of the Kazoo! 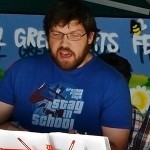 I think I started, as many people have, by getting a ukulele for Christmas four years ago. I got a Beatles uke book too and went looking online for other tabs and chords. I had played guitar badly up to that point but now I hardly touch the guitar. Uke Rules!!!!

I still have my old £40 Makala uke and it has done me very well so far. A few string changes have happened but I have never added to it, taken away from it or adjusted it in any way. I have looked in music shops and tried lots of fancy expensive ones but I’m happy with this one for the moment. No plectrum either.

My first Moselele was at Patrick Kavanaghs in Moseley, about three and a half years ago. I had been playing the uke to myself for four months before I heard about the ‘second best ukulele group in Moseley’. Every first and third Thursday, I would build up the confidence to go along and join, only to put it off at the last minute, not knowing if I was good enough play. Thankfully, I plucked up the courage and it’s one of the best things I have ever done.

At first I was nervous, not knowing anyone (or anything) but everyone was very friendly, accommodating and funny.

The fun, the escapism, the craic, the bizarre mix of songs, the beer and the chance to be crammed into a ridiculously small room with like-minded uke enthusiasts.

Only You by Yazoo or I Will Survive (great chord progression, obviously)

Practise is a very loose term here. I do play but mainly for enjoyment, not to improve. If we have a gig with some new or difficult songs I’ll have a bit of a practice.

There are many… probably the crowds during our beer garden gigs. I love the atmosphere

Do it!!!! Join now. Question Time isn’t nearly as much fun.

I once fixed my hair like Harry Styles off of One Direction and played one of their songs (One Thing) on uke in front of my whole school.