We had a bit of a break for Easter (alright, we forgot to post anything) but we’re back with more questions – and answers! – for our Meet Moselele slot.

This week, Moselele’s only professional funnyman* Tom H is here to tell us all some home truths about the second best ukulele group in the whole of Moseley. (*He’s been known to do it on stage, you know.) 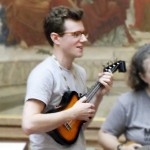 I hadn’t picked up a uke before coming to Moselele. I’ve dabbled with a few instruments before, which I played appallingly before setting fire to them in a fit of rage. So far the uke has avoided this fate.

I’m currently playing a light brown one, it looks like a tiny guitar but with four strings rather than six. The one I play is not one of the very small ones but one of the ones that’s a bit bigger.

Paul PD had pestered me to go to Moselele for about six months. Having eventually relented I turned up without a uke. Daz and I worked in the same office at the time and there was a nice ‘oh it’s you’ moment when I walked in.

Paul knows secrets about me which he has threatened to post on social media if I stop going.

The quality of my playing should be a fairly strong indicator of the fact that I don’t practise much.

The crowd launching into an impromptu ‘Total Eclipse of the Heart’ at last year’s Snowselele. 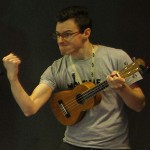 If you like ukes being played in an airless room by people with questionable personal hygiene then this is for you.

If I did tell you then that would break the spell and I wouldn’t have to come to Moselele any more… which would be a shame.