When Emma told us that we’d run out of Meet Moselele articles, we noticed that she hadn’t done one yet. We know what her cat’s called so were able to easily gain access to the blog to ghost write this for her. I’m sure she’ll thank us for it. 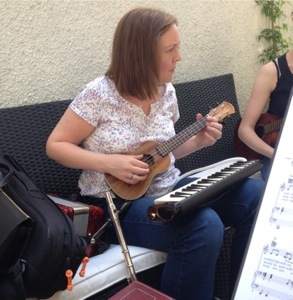 1) Tell us how you started playing the ukulele. (How long ago? Did you play other instruments before?)
I bought one for Daz, although he didn’t really play it until we started Moselele. I can play all the instruments though so uke was easy. I’m the most musical of the whole group of them really. I actually know about things like keys and majors and minors and stuff how all that works. I’m really good and can pick out tunes and work out chords, just like that. I also play plastic bugle, piano, bass, flute, recorder, melodica, accordion, kazoo, flexatone, sackbutt, barrel organ, conche shell, that bit of hosepipe with a funnel on the end that you swirl round your head thingy, steam calliope, and swannee whistle. I’m excellent at swannee whistle. You can make songs sound really rude with a sweep of the swannee whistle.
…..Oh, And I almost forgot to mention the xylophone.

2) What uke(s) do you play? (Have you made any adjustments/personalised it? Do you use a plectrum?)
I don’t actually own my very own uke but use one of Daz’s. I do use a plectrum. Felt, of course. I have a range of felt plecs and get emotionally attached to them, especially if they are lucky or just nice ones. My favourite is called Gavin.

3) Do you remember your first Moselele? (What prompted you to come along? What were your first impressions?)
I’d rather not talk about it. The horror. You don’t know, man. You weren’t there.
We had tea and biscuits. Seems wrong now. Luckily we changed that otherwise we could have been a tea and biscuit sort of ukulele group.

4) What keeps you coming back to Moselele?
Well if I don’t then they just turn up round my house anyway so I have little choice. Although they are an ace group of people, especially Ian and Paul. They’re my favourites.

5) What’s your favourite Moselele song?
I’d really like to do Yellow by Coldplay and Chasing Cars by Snow Patrol but Daz always takes them out of the songbook so we have to do 80s stuff. I do like Look of Love by ABC though because I’m the only person who can the do the “Whoa Whoa Whoah!” bit correctly. The others always get too excited and come in too soon on it. The fools. That’s why I have my own special T-shirt that says “Whoa Whoa Whoa.” It’s in purple. I like purple.

6) What’s your usual Moselele tipple?
Dooooooom Bar. And if there’s a bag of pork scratchings about I’ll steal them.

7) Do you practise at home? (What do your family/housemates/pets think?)
Only when they all turn up to practise before a gig. Sometimes I try to pretend I’m out and hide but they make me come and join in. One time I hid all night. I really wanted to go to the toilet but I couldn’t because they’d hear when I flushed. When they come round it annoys the cat because they all sit in his favourite chair and want to be his friend.

8) What’s your favourite Moselele story/memory (so far)?
I’ll look around the room when we’re playing at the Prince and often somebody will catch my eye and set me off with the giggles. I’m sure some of them do it deliberately to set me off. There was the time however when we were doing Psycho Killer and I caught Mark S staring in a very scary way. When you consider he’s in the background of all the photos long before he joined Moselele there is something slightly sinister about him.

9) What would you say to anyone thinking of joining?
Will you do a “Meet Moselele” questionnaire please? Please…?

10) Tell us a secret.
I’m in charge really. Daz is just a puppet. Don’t be fooled by his “Dazocracy” t-shirt. Nothing happens without my say so.