Meet Moselele is back! It never went away, really. You’ve just been asleep for three weeks, honest.

Anyway, so this week it’s Stephen P. What can we tell you about Stephen? Well, he’s got great hair, and we’re pretty sure he’s is the only Moselele player who’s also been a wrestler. (You never know, though; Phil C hasn’t done a Q&A yet.)

Take it away, Stephen. Or, as he might say himself, “BAYBY, BAYBY, BAYYYBEEEY!…” 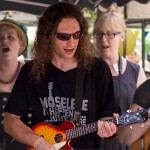 I was looking for ways to meet new people after moving to Moseley and found out about Moselele. After failing to learn guitar I wanted to learn an instrument anyway. So after making sure they didn’t play Kumbayah nonsense, or Formby, I went out to buy a £20 Argos uke and caught the bug instantly.

Playing with a plectrum is one thing too many to think about so I wreck my hand instead. I started out with a Herald (a surprisingly decent cheapy soprano from Argos), before upgrading to Polly, an Epiphone Les Paul acoustic/electric concert. It’s a real Les Paul!

They had managed in the factory to mix up the A and G strings so the first thing I had to do was replace those nasty broom bristle strings with Aquila and a low G.

I almost didn’t come to my first Moselele! I’d only been playing for a couple of weeks and was very nervous. I made myself go and a lovely young lady [Pffft! –Ed] named Emma kept me company. It didn’t matter that I couldn’t keep up with the songs and was simply great fun taking part.

The friends I’ve made, the desire to sing (badly) that little bit louder, play a little bit harder every time, to unleash my inner rock star twice a month and learn something new.

I can’t pick one! Bat Out Of Hell and Hate To Say I Told You Say are ridiculously fun to belt out, just two that immediately come to mind.

I don’t practice but often lose whole evenings to idly picking at the uke or working out a song without realising. I live alone so there’s thankfully nobody to annoy!

There are so many great memories. Who knew that we would get to play on BBC TV in front of a TARDIS for one? The Bulls Head gig, recording our version of a Band Aid video in an evening. I could go on.

The summer and Christmas singalongs at the Prince are just a joy. Playing other peoples’ songs and having a hundred people shout them back at us is a nice feeling; it must be wonderful for real bands with their own songs.

Do it. Bring your uke, join in. There’s no better way to learn than making a noise with mates in t’pub.

I was once slapped in the face by Inferno from Gladiators.